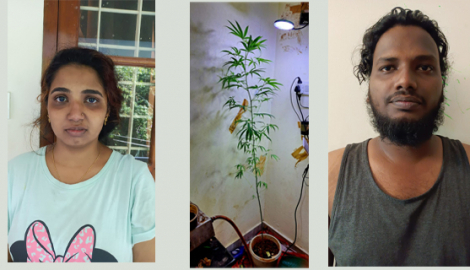 A youth and a woman were arrested by the police for growing ganja saplings in a flat. 26-year-old Alan V Raju, son of VJ Raju, a native of Konni, Pathanamthitta, and 24-year-old Aparna, daughter of Reji, Puthenpurakkal House,  Kayamkulam, Alappuzha,were arrested under the DANSAF team under the Assistant Commissioner of Narcotics Cell Kochi City  Police. In a joint raid conducted by Kochi City Dansaf and Infopark police, the accused were nabbed with ganja plants from their rented flat in the kitchen area. The police seized the ganja plant, which is one-and-a-half metres high and has grown for four months. The police have arrested another youth from the same flat for allegedly possessing ganja. Police arrested 28-year-old Amal, son of Ananthan of Kandathil House in Mallappally, Pathanamthitta. The police are investigating whether Alan and Aparna have any connection with Amal in the drug deal.

If you receive information about such drug mafias that are ruining the future of youth and students, you can send the information by video or audio to the 'Yoddhav' in the WhatsApp number 9995966666. Information can also be provided on the DANSAF number Kochi City Narcotics 9497980430.

Kochi City Police Commissioner said that the names of those who provide information will be kept confidential.